Solar Power and How it Works

Commercial Solar Benefits For Your Business 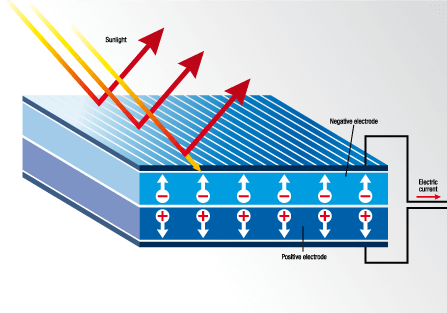 Solar power is an emerging solution for alternative energy. From its humble beginnings in giant, expensive silicon cells, to the more recent commercially available thin-film cells, solar power has never been more affordable. Now you can raise with the sun, and watch as its rays strike the panels of your home solar system, generating DC electricity. You can follow along as your system converts DC to AC, before powering whatever you choose to connect. While the nature of solar power is as simple as 1-2-3, a few key ideas are essential to the process. To understand the cost, benefits, and future of solar power, we first must understand the nature of electricity.

Before we continue into the electrical realm, we need to first picture a solar panel. While there are all types and configurations of these panels, all we need to worry about now is the basic, rectangular panel. One panel is made up of many cells, and each cell is made up of many layers of conductive material. Each cell is constructed with a positive and negative layer, which together creates an electric field. Sunlight transmits photons, which make contact with the cells, knocking electrons loose from their atoms. When both positive and negative layers of a cell are connected to a conductor, an electrical circuit is formed, and the solar harvester is complete.

A simple explanation of direct current (DC) and alternating current (AC), and how they both play into the solar harvesting process can be simply stated: In DC, electrons flow in one direction around a circuit. Imagine a direct connection from a battery to a light bulb. Electrons travel from battery to bulb and back again. A simple circuit. With AC, electrons are both pushed and pulled. Picture the cylinder inside a car’s engine. The cylinder is moved in two, alternating directions, up and down. Electrons are pushed as well as pulled, and occasionally reverse direction. AC was selected for the U.S. electrical grid due to its low cost of transmitting over long distances. Keeping the nature of AC and DC in mind, we now must understand the nature of a solar cell, and how it functions in the grand scheme of electrical production. Solar cells are semiconductors constructed of layers of ultra-thin silicon and other conductive materials. These are often known as photovoltaic (PV) cells. Photovoltaic literally means the production of an electrical current at the junction of two substances exposed to light. When placed into an array, these cells can nearly exponentially expand in their capability to harness light and generate electricity. It is a simple matter of more cells, more sunlight, more energy. But from the surface of those semiconductors, the cells produce DC. How do we convert DC into the good AC with which we can connect to the grid and utilize in our homes and businesses?

Inverters Are The Brains of Solar Power

Generators, whether they are powered by gas, diesel, water, nuclear, coal, wind, or sun, generate AC electricity when a coil of wire is spun next to a magnet. The essential idea here is that a handle is cranked and power is generated. In the case of solar, how do we utilize sunlight to turn the crank?

First, the panels must be connected to an inverter. If a solar system was a human body, the inverter would be the brain. Along with inverting DC to AC, inverters also provide ground fault protection and allow you to monitor important system statistics including voltage and current on AC and DC circuits, energy production, and maximum power point tracking.

A recent breakthrough in inverter technology has further increased the viability of home solar systems. Central, or string inverters, have dominated the solar industry since the beginning. These brains are an integral part of the solar power system, as they are able to convert the direct current from the array of panels as part of a whole system. Newer inverters, known as micro-inverters, can manage the system on a cell-by-cell basis. They are able to optimize for each individual panel, enabling every solar panel to perform at maximum potential.

Each type of inverter has it’s strength’s and weaknesses when production, installation, and maintenance are all factored into the equation of lifetime cost vs. benefits. Consulting with an experienced solar specialist will enable you to choose the best type of brain to run our system.

Harnessing and Metering The Solar Power

We now have a basic picture of how cells, panels, and inverters work together. So how do we get from here to powering a light bulb inside your home with the sun? The inverter is connected to the electrical grid of the home. This means several things. First, the energy is capable of traveling directly into your home’s grid, so that whenever you plug something in or turn something on, it will use solar power if it is available. Since solar power is dependent upon the light of the sun, cloudy days and other conditions can reduce your system’s power production. In this case, the traditional power grid connection is still in place, and you can draw power as usual.

Next, due to the nature of the power grid, any excess energy generated by your system can be harvested and used by whatever power company operates in your area. This means that, should your energy usage be low, or your production high, you will receive a credit on your utility’s account. Thus we get the term Net Metering. A special meter replaces your traditional electrical meter which can monitor not only your usage, but your production too. Now in less productive months, you can use the extra credits you’ve accumulated during the high-production periods.

Whether you install a residential system or a commercial solar system, this is a basic overview of solar technology as it exists today. Breakthroughs are still happening today with certain products, which help increase the efficiency of cells and panels, improve inverters, and enable average homeowners to live more energy independent. If you have any questions regarding the use of solar energy for your home or business please don’t hesitate to give us a call.